Review: In Her Name: Empire by Michael R. Hicks 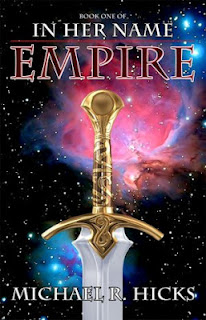 Reza Gard is just one more orphan who has lost his parents to the Human Confederation's century-long war with the all-female race of the Kreelan Empire. Unlike other human boys, however, he has come face to face with humanity's enemy. When the nightmarish, blue-skinned warriors invade his new home years later, Reza is captured and enslaved. Forced to learn to embrace the Kreelan culture, any misstep could mean his death. This proud, alien race wants to know if humanity has a soul. Reza holds a promise that may give them far more than that...but only if he survives.

Empire is the first book in Michael R. Hicks' science fiction series, In Her Name. Another writer recommended it to me as the beginning of a "large-scale, epic series."

Now, I read a lot of books with that label. They promise sweeping space sagas of epic proportions but fail to deliver even halfway into the first book. Most of the time, I can't force myself past the second chapter in these stories.

I am pleased to say that Empire was not one of these. Michael R. Hicks actually gave me the adventure I was looking for. More than that, he held my attention. A pleasant and timely surprise after my recent run of bad science fiction books.

That's not to say it doesn't have a "but." It does, in my opinion, have downsides.

The book starts out slow. There's plenty of action first thing but none of it fits together in a way that pulls the reader into a greater story. Combined with unnerving switchbacks in point of view and no real sense of a main character, it's no surprise that I almost stopped reading without finishing the first chapter.

Fortunately, the appearance of Reza caught me. I was curious enough to continue reading. I'm glad I did. Even then, however, the pull of his character doesn't really set in until about the third chapter - a long time to hold on if you're an impatient reader.

The entire book is filled with jarring POV changes, unnecessary info dumps, and long scenes of narration instead of the action the reader so desperately wants. (I was also disappointed by the ending but that may be more a matter of taste than anything else.)

These are pet peeves of mine, enough to sink other books. But here, the author surprised me. The story itself is gripping. It makes you want to find out more.

I would like to read more in the series when I get the chance but I will say that the quality of the writing gives me pause in doing so. If you plan to check it out yourself, I have two cautions: anyone with a strong inner editor may not be able to enjoy themselves and there are explicit, mature themes about halfway through the book that some readers may not feel are appropriate.

In Her Name: Empire is available in both paperback and eBook from Amazon and in eBook format from Barnes and Noble, iBooks, Smashwords, and Sony. You can visit Michael R. Hicks' site here. And be sure to give me your own thoughts in the comments!