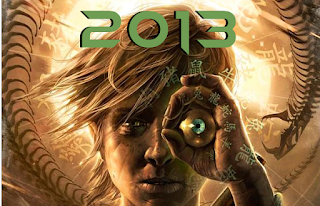 Last April, I published a post on my top favorite science fiction and fantasy books that are on my "again and again" reading list. It proved to be very popular and is still one of the top-read posts on Visions of Other Worlds.

As a result, I decided to take that idea a step further and let you all know what you should be on the lookout for this year. While I haven't yet read any of the following fantasy books, they are my top picks of what I'd like to get my hands on this year based on pre-release reviews and excerpts I've read. If you have better (or further) suggestions, let us know in the comments - none of us bibliophiles want to miss a great find!


I have been a fan of Brandon Sanderson ever since I accidentally discovered his first novel, Elantris, in a bookstore four years ago. Steelheart is the first of a new fantasy trilogy and looks to be one of his best yet.

2. A Memory of Light by Robert Jordan and Brandon Sanderson


I've only read the first two books in the Wheel of Time. I am committing sacrilege in the minds of many by saying two was enough. But since the series has such an enormous fan following, I would be remiss in leaving A Memory of Light off my top ten fantasy books list. (Plus, Brandon Sanderson wrote it, so it can't be too bad.) This is the penultimate end title to the epic saga.


Yet another little jewel I found quite by accident. The debut novel of a comic book shop owner, this is a blend of steampunk and Western for a fascinating fantasy twist that I can't wait to explore.


The Gate Thief is the sequel to The Lost Gate, a tale of otherwordly mages who have long hidden their talents from the world at large. While a few of my friends disliked the first of this series, I was once again happily drawn to yet another world of OSC's masterful making. Definitely a must-read.

5.  Fade to Black by Francis Knight


A city built upwards upon itself. A sun-ruling Ministry and dark-dwelling forsaken. Pain-mages. I swear my imagination exploded when I first read the description of this debut novel from Sussex-native Knight. The first of a series, I'm betting on it being a good one.


A self-publishing super-success story, Sullivan returns to the world of his original books with the first of a prequel series. I've never read his previous books but I am impressed by the reviews from other avid readers of his work. Touted as lighter and more action-oriented than most contemporary fantasy, reviewers proclaim this a quick and easy read for those who love a good action story.


Another debut novel from a new author, this one intrigues my darker senses. It hints at vampirism or, at the very least, undead foes. While I have never been able to get with the current YA and TV trend of sexy vampires, this darker tone appeals to me.

8.  Sworn in Steel by Douglas Hulick


Sworn in Steel is the sequel to Among the Thieves, a novel that took Douglas Hulick ten years to write. Another light, action-packed read, both books look like a fun flashback to eighties-style fantasy that were more single-person oriented than epic.

9. The Golem and the Jinni by Helene Wecker


Once again, I turn to a first-time author to supply me with good reading material. I like the idea of a flow of Yiddish and Middle Eastern fable tradition interwoven with a whole new fantasy tale. Some of the best books I've read have been based on one type of fairy tale or another.

10. Written in Red by Anne Bishop


Any widely-read fantasy fan has more than likely heard of New York Times bestseller, Anne Bishop. While I have never been a big reader of her books, this new fantasy series looks interesting. The concept of telling the future through blood-letting is both new and original and steeped in pagan and mythical traditions of the past. I'm curious enough to give it a go.

Do any of these fantasy books catch your imagination? What's on your reading list for 2013?

Posted by Jessica Marcarelli at 17:20