A to Z Challenge: D is for Dragons, Dryads, & Dobies

ANNOUNCEMENT: Due to popular demand, I will be revisiting the Catagenesis universe every Tuesday for the remainder of April. If you're interested in nothing else, come back then for more of the story! And, please, keep the feedback coming - I love hearing from you all.

D is for Dragons, Dryads, & Dobies


Fantasy creatures are such fun. It's one of my favorite parts of writing fantasy.

While many authors choose to create their own wild characters, others pull from the immensely varied creatures of mythology. This can be extremely beneficial in two ways:
You still need to be careful, though. Die-hard mythology buffs will call you out without mercy if you get an aspect of the creature wrong or ignore long-standing rules of how it looks, moves, etc.

There's also the need for originality. How many times have gryphons or wyrms showed up in fantasy stories? How is yours any different? You'll need to find a way to present the creature in a new, fresh light while staying true to the myths that make it what it is.

To get you started, here are a few of my favorite 'D' creatures: 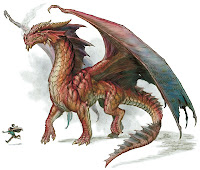 Dragons
Who doesn't want one of these in their story? For that matter, who hasn't heard of dragons?

The word 'dragon' derives from the Greek word drakonta or drakon, which means to "watch for" or "to look at." This suggests that, even then, the myth of the dragon was firmly established as something to be feared and on guard for. The fact that dragons are seen in nearly every major culture's mythology has led some mythological scholars to suggest that there may have, at one time, been a real creature as the basis.

Dragons generally have bat-like wings, scaled skin, a barbed tail, and breathe fire. They may talk as intelligent beings or be a slightly more intelligent form of dumb beasts. Some are harbingers of doom while others are charms of good luck. Most hoard treasure, haunt pools or wells, and are deeply attracted to maidens and princesses.

Some famous dragons are: the Greek Python of Delphi, St. George's dragon, Smaug from J.R.R. Tolkien's The Hobbit, and Nidhoggr, the Norse Dragon of Death.

Dryads
Dryads are one of two species of guardian tree spirits (or nymphs) from Greek mythology. They were often portrayed as companions to the moon goddess, Artemis, or the god of wine, Dionysus. While dryads may move about freely beyond their trees, their counterparts, Hammadryads, cannot. (Hammadryads also die when their trees are cut down whereas dryads have a chance of surviving.) Dryads are often seen dancing or wandering in the forest but it is considered unlucky to see them or stay within their company. They are known to be very dangerous to humans who cut down trees.

'Dryad' come from the Greek word drys, which means 'oak.'

Dryads have been used over and over again in fiction: Milton's Paradise Lost, The Chronicles of Narnia by C.S. Lewis, and The Belgariad by David Eddings.

Dobies
The Dobie, or Dobby, is a British house fairy who likes to help human beings. They particularly enjoy housework or labor-intensive chores and sometimes are given the duty of guarding family treasure. However, the Dobie is not very wise and sometimes make ridiculous mistakes (which begs the question: why would you have one guard your treasure?).

In parts of West Yorkshire, a Dobby is an evil fairy who leaps on the backs of travelers on horseback and garrotes them. Not a good way to go. One wonders what it is about West Yorkshire that produced the murdering spawn of an otherwise helpful, considerate creature.

Obviously, the most famous Dobie is seen in the Harry Potter books and movies (and, according to Google, the only one anyone is interested in sketching). I wasn't able to find any others. If you know of any other stories starring Dobies, please let me know in the comments.


What are your favorite fantasy creatures? And do they start with a 'D?'