Science fiction is big on dinosaurs. Have you ever noticed that? We don't go back in time to imagine how they lived and breathed; no, we hoist them into the future, reworking universes to observe our fascination of these intriguing giants of yesteryear.

Jurassic Park is the most well-known today but they also feature prominently in The Lost World by Arthur Conan Doyle, in works by Jules Verne and Ray Bradbury, and on. The stories vary from dinosaurs who have survived in the depths of untamed lands to alien creatures who share similarities. The science fiction magazine featured above made them into robots! (See the man working on the triceratops?)

This post was, obviously, inspired by my two-year-old who, like all young children, is obsessed with these colossal creatures and fills the house with his "T-wex" roars. 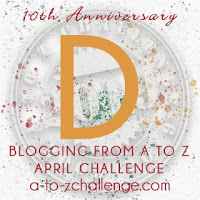 This is a post for the Blogging from A to Z April Challenge, one post (and letter) for each day in April. I hope to see you tomorrow for the letter E!
Posted by Jessica Marcarelli at 17:33